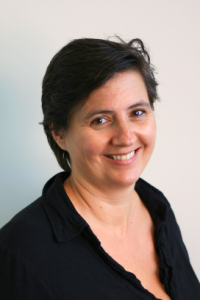 Dr. Susan Morris, first author and lecturer in the School of Physiotherapy and Exercise Science at Curtin University in Western Australia (image from healthsciences.curtin.edu.au)

Neurotypical adults primarily use visual cues to control posture. A new study in Neuroscience finds that adults on the autism spectrum instead tend to prioritize other sensory feedback, such as pressure and motion, to control their body position. These results suggest that popular vision-based techniques for teaching skills to individuals with autism, such as video modeling, may not be as effective for teaching motor skills as they are for academic and some social skills. An approach that incorporates “somatosensory” feedback—sensations that can be felt anywhere on the body, like pressure—may be better suited to teaching motor control.

Lack of consistent motor control can affect an individual’s social interactions if it increases the challenge of responding with appropriate facial expressions and body language. Motor control makes it easier to participate in many activities that facilitate social interaction and relationship-building, so it’s important to provide effective support.

In the new study by Morris et al. (2015), researchers used a device to gently vibrate the neck muscles of 20 neurotypical adults and 12 adults diagnosed with Asperger’s Syndrome (AS) or “High Functioning Autism” (HFA) between the ages of 19 and 40. This same method has been used in previous research. They also used “liquid crystal spectacles” to block the participants’ vision. These glasses ensured that the participants had access to vision at the appropriate times, rather than relying on them to open and close their eyes in response to instructions from the experimenter.  Each participant experienced four experimental states: no vibration with vision, no vibration without vision, vibration with vision, and vibration without vision.

Neurotypical and AS adults responded similarly to neck vibrations without vision: they leaned forward because of the “postural illusion” created by the vibrations. In the condition with vibrations and vision, neurotypical adults were able to maintain an upright posture—they used visual information to override inaccurate sensory feedback imposed by the neck vibrations. The AS adults, however, leaned forward anyway, apparently ignoring the visual cues in favor of the somatosensory input.

Furthermore, when there were no vibrations, the AS adults had greater variation in their postural stance when they could see compared to when they couldn’t. This suggests that for individuals on the autism spectrum, visual information was not consistently helpful to maintain proper posture; it might even be a hindrance under some circumstances.

“Individuals with autism often experience challenges initiating skilled movements, even when they are able to visualize them,” said John P. Hussman, Executive Director of the Hussman Institute for Autism, adding, “There’s evidence1 to suggest, for example, that having a person push through very mild backward resistance against the intended movement can help to close the ‘sensorimotor loop’ between intention and action.”

Previous research has provided evidence that individuals with autism process visual stimuli for understanding what they see (“vision-for-perception”) similarly to neurotypical individuals. This study suggests they process visual information for the purpose of moving and acting (“vision-for-action”) differently, however. Scientists believe these two processes are controlled by separate information streams in the brain, and the authors of this study recommend research that directly compares the functionality of the two streams (dorsal and ventral) in neurotypical individuals and those with autism.

This study only included individuals with Asperger’s or HFA, so its results might not apply to other subtypes of autism. Even so, its implications for interventions could be important as families and educators choose how to teach children with autism various skills. Similar to, and perhaps because of, its variety of complex causes, autism requires a broad range of techniques to help individuals on the spectrum live full lives. Knowing which techniques to apply to which skills could significantly influence how well and how quickly an individual learns.