Promise and Pitfalls: New paper reviews the use of induced pluripotent stem cells in autism research 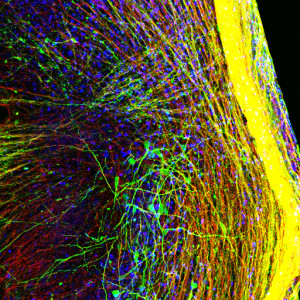 A recent review by team members at the Hussman Institute for Autism (HIA) discusses new and emerging technologies related to the use of induced pluripotent stem cells, or iPSCs. iPSCs are mature cells, such as skin cells or blood cells, that have been experimentally coaxed (“induced”) into a state where they can be turned (“differentiated”) into most cell types in the body. The induction and differentiation process has significantly matured since its development in 2006 and holds great promise for many types of medical research. “One of the exciting aspects of working with iPSCs is that we can study autism in human neurons that have the exact genetic background of a given individual with autism,” said John P. Hussman, executive director of HIA.

“With the advent of automation to scale up the production of these cells, iPSC technology is beginning to come of age,” said Dr. Michael W. Nestor, first author on the review and an investigator at HIA.

iPSC-derived neurons grow in culture and typically form two-dimensional (2D) sheets of cells. That’s a good start, but it doesn’t accurately represent the complexity of a real brain. Not only are the neuron cultures 2D, but some only contain one cell type. A brain contains a variety of cells including neurons and several types of glia.

Recently, a number of research groups developed methods to grow brain “organoids,” three-dimensional (3D) structures that contain multiple cell types and get a little closer to reflecting the complexity of a human brain. Before coming to HIA, Nestor was a scientist at The New York Stem Cell Foundation Laboratory, where he developed an improved method to grow a specialized type of 3D brain organoid called a “serum free embryoid body,” or SFEB. This system approximates some aspects of early developing brain tissue and allows researchers to capture images of cells in real time or record electrical activity of individual cells. This flexibility, in addition to containing a mix of neural cell types, makes the SFEB a valuable platform for the study of developing neural networks.

Now at HIA, Nestor and his colleagues are using a variety of iPSC methods to delve into the neurobiological mechanisms of autism. Conditions caused by a single genetic change were initially the target of iPSC work, but many genes have been associated with autism. That makes understanding the condition much more difficult, but Nestor sees it as an opportunity:

“That’s why I wanted to do this work. You have to apply these technologies the best you can to really hard questions.”   If scientists can use iPSCs to model aspects of the neurobiology underlying autism, “You may also open up pathways of discovery for other diseases,” Nestor said.

The review discusses other conditions with similarities to autism that have been successfully modeled with iPSCs, such as Rett, Fragile-X, Timothy, and Angelman’s Syndromes. Then it dives into the emerging technologies that may help iPSC-based models of autism more accurately reflect differences observed in the brains of individuals on the spectrum. 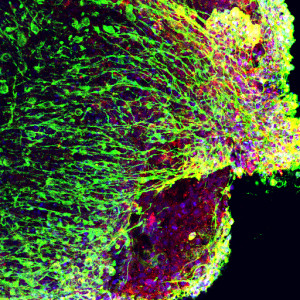 Nestor and his team are using techniques like “CRISPR”, “optogenetics,” and “cellomics” to enhance the work they do with iPSCs. CRISPR is a procedure that can change a DNA sequence at a specific single point. That gives the researcher control over the protein that is produced based on instructions from the altered DNA. Using this technique, researchers can repair or induce genetic mutations that are associated with conditions such as autism, in order to study their effect on how various cells function. Because autism can involve so many genes, a lot of scientists are wondering just how much each individual mutation may affect a person’s brain development and function. By creating 2D cell lines or 3D organoids with different combinations of mutations, and then studying the functionality of the cells, scientists can learn to what extent each mutation plays a role.

Optogenetics uses light to precisely activate gene expression in individual cells. This minimally-invasive technique allows researchers to examine the roles of individual cells in the brain without disrupting individual cell membranes or connections between cells. Optogenetics has been employed to look at stem cells that model Parkinson’s disease, and Nestor believes it holds great potential, in conjunction with CRISPR, for getting the most out of iPSC work in autism.

Cellomics may also work well with iPSC cultures to determine the effects of different mutations in a condition like autism. Cellomics allows for high-throughput, image-based screening of cells in culture. The end result? “You can increase the number of experiments you can do in a really short time,” said Nestor. Testing large numbers of samples allows researchers to distinguish between real effects and flukes specific to only a small number of cells.

With all these advantages, the advent of iPSC technology is a boon for scientists everywhere. But it’s not a silver bullet. Nestor is quick to point out, “This is an interesting tool. However, the technology itself is still in its infancy, and there’s quite a ways to go.”

Costs can become prohibitive, easily running three to 10 times as much as a typical mammalian cell culture operation. And while iPSCs are clearly useful for research, the possibility of using them for “cell therapy”—for example, to replace damaged brain cells in a Parkinson’s patient or cartilage cells in someone with joint pain—needs much more study. “There’s a debate in the field that’s still quite open-ended as to whether iPSCs are somewhat inherently cancerous,” Nestor said. Because of their quick division rate, if iPSCs were injected into patients, some research suggests there’s a small chance the cells could divide uncontrollably and develop into cancerous tumors. But other data suggest there is no threat, so “the difficulty with iPSCs is precisely that it is unclear,” Nestor said. 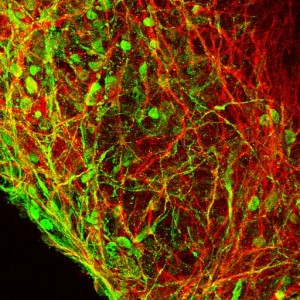 Another major challenge is that iPSC technology is so new it hasn’t been standardized. Each cell used as a starting point for iPSC culture comes from a real person, so each has a unique genetic profile. That’s beneficial when you consider the potential for personalized medicine, but it makes it harder to find patterns across the general population. Plus, protocols in each lab for inducing the stem-cell state are slightly different. That makes it difficult to compare results coming from different research teams. “Standardization is the key to being able to compare apples to apples,” said Nestor. “Unfortunately, it’s not the case in the field now.”

“That’s where robotics comes in,” Nestor added. Using robots to generate iPSC cultures would help to standardize procedures, and it has been done. But it’s extremely expensive, a constant challenge when working with iPSCs.

With all its challenges, iPSCs still have great potential to support autism research. While animal models are important research tools, “Autism is a uniquely human condition,” said Nestor.  “Unlike many other conditions, we also have to really work with the human tissue to answer these questions.”  iPSCs afford that opportunity.

Nestor believes the Hussman Institute for Autism is uniquely positioned to tackle the challenges of autism research with iPSCs because it straddles academia and industry. Collaboration is key: The genetic expertise at the Hussman Institute for Human Genomics at Miami University drives the high-powered cellomics and other cutting-edge techniques in use in Baltimore. “I think that we’re in a unique space,” he said.

By combining all these efforts, “The ultimate goal for me, in this institute, is just to understand what autism is,” said Nestor. “What does it mean at the cellular level? Until we do that, there’s not going to be an over-arching treatment, because we just don’t know what the underlying molecular mechanisms of autism are.”

The original article is found here: